Delaware’s milling story began in 1794 with Ebenezer Allan’s land grant, conditional on the construction of mills for the settlers. By 1796, he had sold 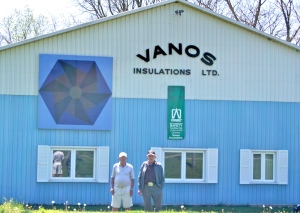 the mill to Joseph Kilbourne and his sons, Timothy and Aaron.

Allan and the Kilbournes had a long tradition developing mills in New York State and brought these skills to Delaware. Imagine arriving in this wilderness, the nearest blacksmith being sixty miles away.  Hand tools and incredibly hard labour created the timber frame for the mill and the mill pond.   As for the saws and millstones required, the experienced millers came prepared.

Delaware quickly became a thriving frontier village. The economy was based on its grist mill, distillery operations,  and the harvesting and processing of the pine forest.  The lumber was used locally and rafted down the Thames for export.

Disaster struck in March 1801 as spring floods washed out the mill dam. This along with Ebenezer Allan’s questionable business practices caused the Kilbournes economic ruin. They  later set up milling operations at Kilworth, three miles to the east on the Thames River, with their  father-in-law  Benjamin Woodhull. He too was miller from  New York State.  By 1804, the Delaware  mills were owned and operated by Moses Brigham and Gideon Tiffany.  The mills continued to serve the community until the destructive raids of General McArthur in 1814.  The mills were all reduced to ashes.

Aaron Kilbourne tells in his biography of the state of despair at the end of the war. With eight small children to feed he was forced to sell one of his remaining oxen and order two barrels of flour from Detroit, 120 miles away.  A sorry state of affairs for a miller!

And the secret under the Gideon Drive?  Local legend says that the millstones from the historic Delaware mill were used as landfill in the building of the road.

Source: A KILBOURNE QUEST..LITCHFIELD TO LAMBETH by Clarence W Sadler.

Mary is one of the facilitators for barnquilttrails.ca, a Canadian network of quilters, rural organizations, museums, historians, sponsors and many others with a passion for rural Canada. We are working together to promote and enhance rural creativity, the arts, Canadian heritage and culture.
View all posts by Mary Simpson »